We had a hack week at the place I am working, and as a Rust lover I tried to make a small Rust lib that basically do some string encoding so that in the future if we need to work on something more fancy in Rust, we could have this lib at hand to conveniently changing some gid such as dbc3d5ebe344484da3e2448712a02213 to a base 62 encoded uri such as 6GGODyP2LIdbxIfYxy5UbN.

With some help from some awesome colleagues, writing a lib like this in Rust is pretty easy and fun.

Then I thought: If I have this lib in Rust, then can I use it in our BigQuery’s UDF via WASM to replace a similar function written in JS, so to speed up things?

Well, the answer is:

I will show you how to achieve this later in the post. But let me explain why for my case, replacing JS code with the Rust/WASM code didn’t help speeding up things.

Why Rust/WASM not faster than JS code?

While I was trying to get it all work, a nice guy Pauan (who seem to be some core developer on Rust-WASM stuff) gave me some great help.

Pauan also mentioned that what I was trying to do might not gain speed improvement. Simply citing Pauan’s words:

If you gets a bit confused reading this and would like to know more about JS String to Rust WASM, I think you can take a glance of this post

Anyway, here I show you how you could basically do this. And it might be a valid user case if you have some BigQuery user defined functions, in JavaScript code, that is taking a number in and do some heavy calculation and return a number out. In that case, the String copy cost won’t be in your way. So you could potentially gain some speed improvement.

So how to call Rust functions from BigQuery with WASM

Basically I got this idea after reading Francesc’s post on “Calling C functions from BigQuery with Web Assembly”, and a follow up post from Felipe Hoffa’s post on “BigQuery beyond SQL and JS: Running C and Rust code at scale with wasm”

However they are all a bit out dated, for now the Rust WASM community have come up with many convenient tools to help you achieve things like this. There are two tools we will use for our Rust WASM code:

Let’s start with a Rust lib function rb62::get_b62 - just suppose this is some Rust lib out there that you want to use in WASM, and eventually run on BigQuery. I am using this rb62 lib repo as my example.

And the output is:

Very simple, String in and String out.

Then configure the wasm lib’s Cargo.toml file as below

Now we can happily write our wasm Rust function get_b62:

Basically it is wrapping a function with tag #[wasm_bindgen]. And what #[wasm_bindgen] will do is that it will help you generate a bunch of helper code so that a String can be memory copied from the JS vm to WASM’s linear memory. Without it, you would have to write lots of code to do this manually, as this outdated post have described. (Even though it is outdated, I suggest you still read about it to understand what is happening under the hood)

Then after we have the code, we can now build our Rust wasm package very simply like this:

Those are the wasm files that has the code of our Rust function.

Then, in order to use these conveniently in a Javascript environment, Pauan has helped making me a JS script to basically combine those to files to a single JS file to be used.

Prepare a glue JS script and run it

The script he made is this one generate.js

which will create the base62.js - a golden single file include the JS helper code and the wasm byte code in it!

If you take a glance of it, you would spot all the helper code that is more or less the same with the manually written code in the outdated Stackoverflow question I linked above.

Now, before try out this code, you need to a manual thing:

This has to be done because in BigQuery JS environment it doesn’t have the word self. Also, as the webpack generated code are not meant to be used on places like BigQuery, it means what we are doing here is a very special and even a bit hacky-ish thing. So to make it work, for now, you just need to manually replace the 2 self as this in base62.js.

Now you can try it out locally with some simple JS code:

Running it to verify:

It works! (Or you can even play it out in your browser from here https://liufuyang.github.io/rb62-wasm/)

Use this on BigQuery

Now we can use this on BigQuery, firstly, upload this code onto some GCS place, in my case I put it at "gs://liufuyang/public/rb62-wasm/base62.js" 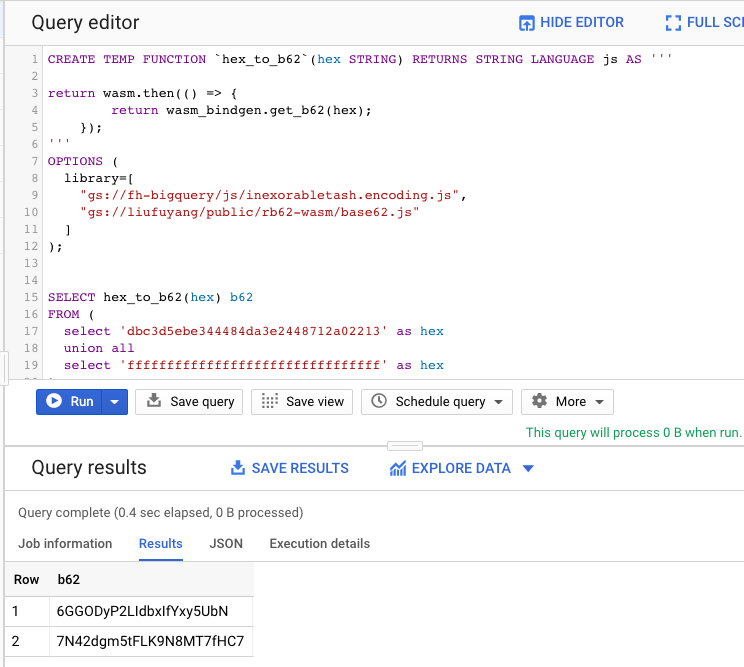 Note that "gs://fh-bigquery/js/inexorabletash.encoding.js" is needed as it provides us the needed TextEncoder and TextDecoder used in base62.js, see this stackoverflow answer from Felipe Hoffa

Grouping input to speed things up

As you may have already noticed or not, if each row of the select query is calling once this UDF, then each time a WASM runtime is initiated. And it takes time to do that.

As mentioned in the beginning, this is not really helping speed things up as firstly there is time needed to load wasm runtime, and mostly importantly it just cost too much to copy JS string to Rust wasm string and back-forth…

For some specific queries , the wasm version is around 23-27 seconds to finish, while directly use the js library it uses 10-13 seconds, both with the grouping idea mentioned above. Without grouping it is much much slower for the wasm version.

I hope this post helps anyone trying out similar or related stuff out there.

As Felipe mentioned to me and you can see some discussion on this StackOverflow page, this means that, in the BigQuery UDF JavaScript function you defined:

that wasm is actually not loaded again and again for each row. The same process was reused multiple times, and variables such as wasm were kept around in between calls. Though this is not officially documented anywhere yet, according to Felipe’s answer.

Then this means we can just used our WASM function as if it is a JS function directly and let’s run it again and do some speed comparison on some fairly large amount of data:

This one is for b62_to_hex comparison:

And this one for hex_to_b62 comparison:

I would conclude that the result is not much different than the previous test with grouping. But indeed the SQL code can be much simpler now.

It is still a bottle neck of the String copies from JS to WASM. Looking forward to someday on BigQuery you can run native code, perhaps via WASM or WASI, then that would be pretty cool and Rust will be very helpful in that case.

And special thanks to Pauan and Felipe Hoffa for the great help and support on me trying these random stuff out :)